Deprecated: The called constructor method for WP_Widget in wpex_recent_posts_thumb_widget is deprecated since version 4.3.0! Use __construct() instead. in /home/usi4rw6m6ztg/public_html/wp-includes/functions.php on line 4871
 Raising a Healthy (and not picky) Eater - Outside The Box 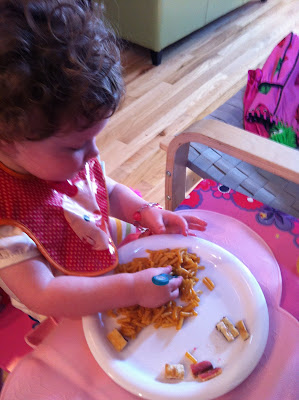 I am a first time mom but I’m no stranger to caring for children.  I worked several years in childcare, working as a live in care giver, a live out care giver and in a home daycare.  I’ve seen my share of picky eaters, which often leads to unhealthy eaters, and have learned some strategies to deal with the issue.

Raising a Healthy (and not picky) Eater

I have a few simple rules that I stick by:

Always look at the big picture and your child’s diet overall.

Don’t stress over one unhealthy meal or your child walking away from the table after just a few bites.  Strive to give your child a well balanced diet overall.  The occasional trip to McDonalds or macaroni for breakfast will not hurt your little one and will not sabotage your effort to raise a healthy eater.

If your little one comes to the table, picks away at his food (even his favorites) don’t worry and don’t push him too hard to eat.  Some gentle encouragement is ok but beyond that don’t force the issue. It’s especially important when starting solids with babies to watch for the cues that they are done eating.  They need to learn to listen to their own bodies.  They will not starve (of course I’m not talking about kids with medical conditions that might effect their eating habits or skills)!

This is especially useful and important in the toddler years when kids are really exploring their independence.  Getting them involved in making food decisions is a great way to get them interested.  Just be careful with the questions.  It’s usually best to offer 2 or 3 options at most rather than an open ended question because if you ask, be prepared to give them what they request!

For older children, if you are making a meal you absolutely know they won’t like, make them an alternative.  When I was a live in care giver I cooked meals for 9 or 10 people, two of them young kids.  If I was cooking something I knew they would turn their nose up at, sausage and broccoli are two things that come to mind, I would make sure I made a small pot of carrots and a couple of hot dogs. I would put all the options in front of them an let them decide.

Get the kids in the kitchen and let them help. It’s a huge motivator for a lot of kids. It’s also a really good opportunity to talk about nutrition. Starting from the toddler years you can easily find ways to have the kids involved in making meals.

If they don’t eat it the first time just keep offering it up.

Again this works very well with toddlers. You cook up some lovely green beans and your little one won’t touch them.  Will he ever like them?  Maybe not, but probably.  Cook them up again tomorrow, put them on his plate, let him see you eating them.  You can put some on his spoon and offer them up but don’t make a big deal over it.  If he shakes his head and wants nothing to do with them just move on.   You might serve him green beans 10 times before he finally even decides to take a bite of them but chances are he will eventually do just that.

Do not, ever, force a child to eat something they don’t want to (medicine excluded!)

I spent hours sitting alone at the dinner table with disgusting, cold brussel sprouts on my plate with strict instructions that I was not to leave the table until my plate was empty.  This is a sure fire way to raise a picky eater (trust me I know).  It’s one thing to encourage your child to try something new, but forcing them to choke down food that they have made it clear they don’t like just serves no purpose.

We do have a one bite rule in our house now that my daughter is older. It’s something we started when she was around three. If there is something on her plate she’s never tried she has to take a bit. I don’t care how minuscule that bite is. It might not even be enough for her to actually know if she likes it or not but that’s not important. After that taste, if she doesn’t want to eat it she doesn’t have to. She’s discovered a lot of new favorites that way.

Do not tie finishing everything on a kid’s plate to dessert or other treats and do not reward good behavior with food.

We often have dessert in our house.  When Molly was really little there would be some nights she would take two bites of her meal, push it aside and asks for ice cream.  We let her know that when either mommy or daddy are done eating their dinner we will get her some.    More often than not she would actually pick away at her dinner while she waited.  Even after she got her ice cream (a small amount) we would leave her plate and it wasn’t unusual for her to eat some more dinner after the ice cream.

Tying “treats” to behavior, whether it’s eating your dinner or “being good” is never a good idea.  Food should never been seen as a reward. I’m not saying you shouldn’t give your kids something special here and there, nothing wrong at all with that, but do it just because.  Bad relationships with food can start early and eating as a reward it a bad food relationship.

I won’t insult anyone’s intelligence by elaborating on this. I’m sure you have a reasonable grasp on nutrition and what constitutes a well balanced diet, so just practice what you preach. We all know that “Do as I say, not as I do” doesn’t cut it with kids…

My little one is five  now and is turning into a really great little eater that is very good at trying new things.  But man that toddler stage was challenging!  There were evenings where I would get absolutely exasperated because 30 seconds after we sat down Molly would announce “I’m all done.”  She changed her mind like the wind – One day she likes strawberries but the next she hates them and it would sometimes feels like a constant battle to get her to eat well or to eat at all.  Some days I would get home from work and have absolutely no clue what to make.  Will she eat fish today?  Will she at all?  That stage can be  a bit of a roller coaster at times but we were confident  that we, as parents, were making the right choices and helping her to make the right choices and now we have a 5 year old who thinks sweet peppers and broccoli (no cheese sauce required) are delicious and requests green beans and peas for supper.  I think we’re on the right path.

Home workout tips from a busy (and fit) mom

The Super Bowl half time show. It's a big event every year. Almost as big as the game itself (for some people). And every year,…read more →

In our home we believe in a balanced diet.  What exactly does that mean to us? It means that there are no forbidden foods and…read more →

This article has 6 comments