Deprecated: The called constructor method for WP_Widget in wpex_recent_posts_thumb_widget is deprecated since version 4.3.0! Use __construct() instead. in /home/usi4rw6m6ztg/public_html/wp-includes/functions.php on line 4871
 Terrible Twos - Just Wait for the Terrifying Threes - Outside The Box 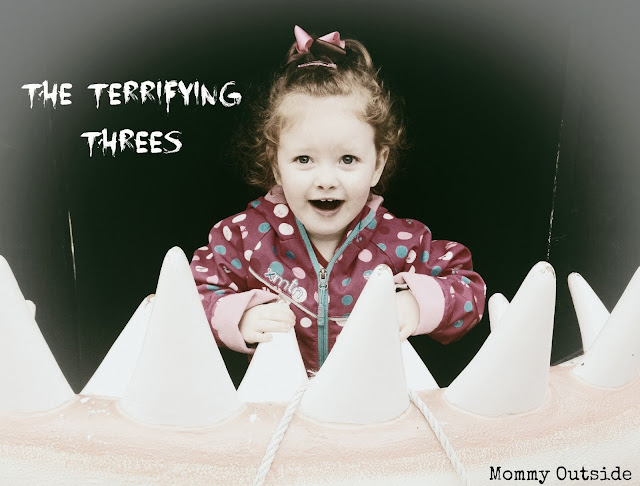 I don’t think I ever really believed that being a parent would be easy.  I spent several years in the childcare field, spending a significant amount of time caring for kids around my daughter’s age.  And, yes I realize that childcare, as important as it is, is not the same as parenting.  But I did believe that background would at least give me a fighting chance.  I was so wrong.

Every stage of this journey is filled with a new challenge.  Yes, there are rewards.  I never lose sight of the fact that I have a beautiful, bright fun loving little girl.  But when she’s screaming at me about some earth shattering problem that I can’t even begin to comprehend it can be difficult to keep things in perspective.

We somehow got through the infant stage.  That was difficult.  If you have read some of my previous posts you know that our little one had pretty bad reflux as a baby and that was a hard road.  But, yes we got through that.  And then, soon after that experience we were faced with diagnosing and managing asthma.  Another stressful chunk of our life but after many sleepless nights and a good doctor we managed to get through the worst of that one too.

No sooner had we gotten the bulk of the health problems (and throw the joys of teething into that mix) when the infamous terrible twos hit.  Oh what fun that was.  Tantrums, mood swings, happy and sweet one moment and sobbing the next. It was a roller coaster of emotion.

After months on this crazy, bumpy road it finally started to feel like things were settling down.  I may be fooling myself there.  It just might be that we were so use to it that it just didn’t effect us as much.  Perhaps, a little but of both.  But then something happened.  Just a few weeks ago (now just a couple months before her third birthday) there was a significant shift in our daughter’s attitude.  And the key word here is “attitude.”  She went from whining and reluctantly doing as we was asked to just flat out letting it known she will not do as she is asked.  She has always had a pretty remarkable vocabulary  but now her favorites are – I’m the boss, I don’t like that,and just plain NO.  She thinks it’s terribly funny to run away laughing if you try to talk to her about anything she isn’t interested in.

Last night I wondered what wild and obnoxious creature had come in and swallowed my little girl. She was absolutely furious with me and for the life of me I couldn’t figure out why. It doesn’t matter how good of a vocabulary they have, when a three old starts screaming it’s next to impossible to figure out why.  I try the “use your words” technique but to no avail. It’s like dealing with a baby again, but the difference is this baby is big and wild and so much louder. I put her in her bed and told her to stay there until she calmed down, a method we use on a regular basis and usually with fairly good results.  But last night it just wasn’t cutting it.  Instead of calming down she just sat there screaming at me “I AM CALMED DOWN.” At the top of her lungs.  It was not fun.

My husband didn’t get off any easier.  He picked her up from daycare and I understand things were going reasonably well on the trip home until a man riding a bicycle went by.  This infuriated her.  She, very much like her mother, is a stickler for rules and she has decided that riding a bike in snow is absolutely against the rules.  That was it.  The mood has been set and changing it would take a monumental effort on our part.

Taking her out is a total crap shoot.  One day she will behave like a little angel and, just when you have convinced yourself that an outing with her is not terrible, and maybe even enjoyable, she changes it up.  She thinks licking things in public is funny.  She suddenly seems to have an addiction to the thrill of running away from mommy and/or daddy in the grocery store and giving herself a slight scare when she realizes she can’t see us anymore.  Oh these are fun times let me tell you.

I know that when it comes down to it she is a pretty happy, reasonably adjusted kid. When she is at daycare she is, for the most part, a content (although still a little on the bossy side) engaging child who is eager to please.  She just saves up the frustrations and the boundary pushing for mom and dad.  And I also know that is perfectly normal and healthy but that fact makes absolutely no difference when I am sucked right into the middle of that three year old tornado and hurled out the other side like a piece of  mangled farm machinery in Twister.

They say that kids lose their “cuteness” around the age of 4 1/2.  My little angel/demon has less than two years to go before that little baby face stops me from wanting to giver her to the first kind looking stranger that is willing to take her off my hands.

Has there been a particular age or phase that your kids have gone through that you found to be challenging?  If you have more than one did you find their stages to be different?  Was gender a factor?

My baby girl turns 9 next week. 9! I’m still trying to wrap my head around that. I asked her months ago what she wanted…read more →

This article has 12 comments