Deprecated: The called constructor method for WP_Widget in wpex_recent_posts_thumb_widget is deprecated since version 4.3.0! Use __construct() instead. in /home/usi4rw6m6ztg/public_html/wp-includes/functions.php on line 4871
 Do you want gravy with those fries? - Outside The Box 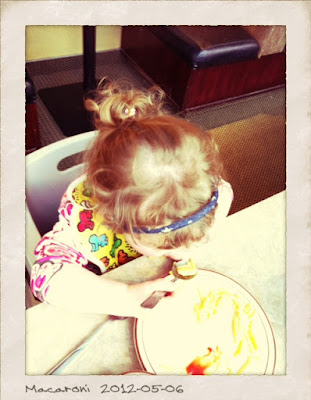 My husband and I gave up on the idea of going out for dinner after my daughter was born.  She was a high maintenance baby (which had a lot to do with her reflux) who cried a lot and also had extreme separation anxiety so where we went she went. Over the past year we have taken her out here and there for meals and over the past several months we have made a point of taking her out, even if it’s just to McDonalds, at least once a month so eating out just becomes a “regular” event for her.

Overall she has done well but there are so many factors involved with having a successful meal out with a toddler.  We follow logic and our experience with her, not going out too late so she’s tired, bringing things to keep her busy, packing snacks, going to restaurants where we can reasonably expect the wait to not be terribly long. We also try to pick places that are family friendly and the occasional outburst (whether it be a happy outburst or not) is acceptable.  The fact is you can plan all you want but some things (like toddlers) are just out of your control.

I had a coupon for a free kid’s meal at Smitty’s so we decided to have a family meal out last night.  My husband and I have been together for about 6 years now and we have never eaten at Smitty’s before.  Don’t get me wrong, I am not putting down the fine people at Smitty’s.  We are just, well to be honest, food snobs and before being parents rarely went to a place that had chicken nuggets and Oreo cookies on the menu (I also never use to use coupons).  Nonetheless, off we went to Smitty’s.

Molly was fresh from a nice long nap and had an appetite (although I made sure she wasn’t too hungry). We still managed to get off to a bit of a rocky start with her yelling and throwing her crayons (which the restaurant provided) on the floor and just generally making a scene.

One of the keys to a successful meal out with a toddler is having the right server. Last night we lucked out!  The young lady who helped us out was wonderful.  She brought us a booster seat to start but when I realized that just wasn’t going to work out (Molly needed to be a bit more contained) she quickly brought a high chair to the table.   We ordered our drinks and she brought Molly’s water in a nice little cup with a lid and a straw which she loved (I find they usually don’t bother with a kids cup when you just order water).  She realized we had been too busy dealing with our fidgety kid to even look at the menus and suggested that we go ahead and order her meal now so she could get it too us quickly.  Wonderful idea.  I ordered the macaroni and cheese along with french fries (the other options were a salad which isn’t toddler friendly or a fruit cup generally from frozen fruit which she won’t eat).  The server asked me if I wanted gravy with those fries. Well, that’s a good question. Has she ever had gravy?  I don’t think so.  Would she like gravy?  No idea.  She goes through “dip” phases where she loves it and then hates it so it was impossible to predict.  I went ahead an ordered gravy (on the side).

Her meal came quickly, and, bless her heart, our server put the dish in front of me and not my two year old!  That is one of my biggest pet peeves when eating out with our daughter –  servers who don’t even hesitate to put a huge plate of food (often hot) and a massive cup of water or milk right in front of our small child. I’ve even had them put my piping hot cup of tea or my husband’s coffee right in front of her.  And I’m talking about eating at family restaurants where I expect the staff to at least have some experience serving FAMILIES.

So, Molly had her dinner and she was pleased with it.  You really never know with a two year old. However, tonight macaroni and cheese was met with enthusiasm.  And the gravy? It appeared to meet with her satisfaction as well.  I had a moment, sitting there watching my little girl dip fries into gravy, when it hit me how much she is growing up. I know it’s just fries and gravy but there is just something “sophisticated” about it.  A month or so ago that bowl of gravy would have been on the floor, on my lap or all over my daughter as she picked it up and tried to drink it right from the bowl.  So, seeing her sit there and almost daintily (which is not a word I use often with her) dip her french fries in it was, well, almost monumental.

All in all a successful meal out.  There were few tears, only a couple of minor tantrums (so minor I don’t know if I could even call them tantrums), the only real mess was on the table (not on mommy, daddy or the floor except for a few pieces of macaroni) and everyone ate and enjoyed their meals.  The next meal out might be a complete disaster but at least I will go into it with the memory of this victory and Molly eating fries and gravy.

I saw these pillow loungers for sale on Zulily recently and thought well those look pretty easy to make at home. And they are. And…read more →

On the weekend we went out to pick a Christmas tree.  We found a lovely one for the front room but Molly spotted this little…read more →

We set off to my cousin's house to adopt a kitten (she works with a cat rescue organization) and came home with with two.  It's…read more →

This article has 2 comments