Deprecated: The called constructor method for WP_Widget in wpex_recent_posts_thumb_widget is deprecated since version 4.3.0! Use __construct() instead. in /home/usi4rw6m6ztg/public_html/wp-includes/functions.php on line 4871
 You're No Angel - Why Do You Expect My Kid to Be? - Outside The Box 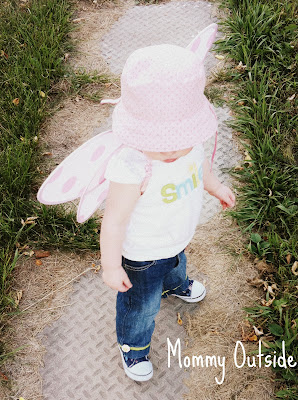 A few months ago I took my two year old daughter with me to grab a few essentials at our nearby grocery store.  She was in a great mood and was having fun helping mommy shop.  Shortly into our shopping venture were were browsing in a grocery isle and she was skipping happily along very close by me.  She accidentally bumped into an older fellow who promptly yelled a profanity at her and asked her what she thought she was doing.  I took her hand, calmly looked at the man and told him she was two years old and under no circumstances should he talk to a two year old that way.  He proceeded to tell me, with more profanity, that he had two wooden legs and she damn near knocked him over.  Well she came nowhere near knocking over the old bat who “allegedly” had two wooden legs.  And, even if she did, that’s still no excuse to talk that way to a toddler and I once again stated that to him.  I then knelt down, hugged  my slightly shaken daughter and reassured her that she did absolutely nothing wrong, that it was an accident, and that this man just happened to be grumpy today. He stomped off in a huff (and pretty steadily for a guy with two wooden legs who just about got run over) and several bystanders came over to comment on how awful he was to us.

There have been a couple of stories floating around on social media recently that you may or may not have read about.  The most recent was about the restaurant that gave a family a “good behavior” discount on their bill for apparently having three well behaved children.  The other story goes back several months and involved the parents of infant twins handing out treat bags to fellow airline passengers with a note saying they would do their best to keep the babies quiet but apologized in advance if things didn’t go smoothly.

Our daughter is generally pretty pleasant and polite at restaurants.  Even so, I don’t think I would take her to an establishment who thinks it’s their business to judge how “good or bad” my kid is any particular evening.  Does the restaurant also offer discounts (or in actuality it was free ice cream that was written up on the bill as a discount) for adults who exhibit good behavior? I’ve seen many an adult act like an over tired child in need of a nap while out in public.

I’ve also flown, many times, with our young daughter and I have never offered gifts or notes to other passengers to try and soften the blow in case my small child dares utter a peep on the flight. I’m not judging the parents who thought that was a good idea (they actually weren’t the first to do that) but I think it is a statement on society that they felt the need to do so.

Kids are, well, they are kids.  Babies and young children in particular can be unpredictable, emotional and unable to communicate their needs clearly.  They, like all of us, have good days and bad days.  The difference is we are full gown adults who should know how to act like adults in public no matter how crumby our day is.  Kids don’t automatically have those skills, they are taught and take time to sink in.  If you are going to go to a grocery store, family restaurant or getting on a plane you have to expect that there might be children present and there may be crying, screaming or tantrums.  That is life.

You were a kid once too and you were not perfect.  I don’t want to hear crap about how your parents never would have “allowed” you to act that way. No parent that I know just “allows” their infant to cry or their 2 year old to have a tantrum.  That’s just what they do! It’s not a sign of bad parenting or a society that is raising spoiled brats. And if your parents really and truly were able to stop every single incident of childhood angst before it even started I honestly don’t want to know the details of how they did it because it probably was not something healthy or positive.

Oh my word is it ugly outside. It's the first week of October and fall has decided it's coming in with a vengeance. A cold,…read more →

Another awesome recipe from my amazing friend Jessica! Apple Cider Caramels There are only 2 sleeps until Christmas and if you’re anything like me, you…read more →

Cereal & Milk The Perfect Friendship How do you start your morning? Does your routine include a delicious bowl of cereal with milk? There's a…read more →